Welcome to THE LINDER COMPANY Software

We welcome you to the homepage of THE LINDER COMPANY Software. On this site, we provide you with our latest software developments, maps, add-ons and more. Our freeware products range from useful utilities like the scheduler TimeGuardian over maps for popular games like Age of Mythology to entire games, like the 2D real-time strategy game Sorades - Die Befreiung that is presented below.

Please note that due to massive spam abuse, our forums have been set to read-only for the time being. If you have got problems with our software, you may want to skim through the forums to search for existing advice there. If your problem has not been mentioned in our forums, feel free to contact us via e-mail.

Users of our Flight Assistant, however, shall notice that the development of this product unfortunately has been on hold for several years now because of a lack of time.

TimeGuardian Deluxe - The latest version of our scheduler and reminder. Now also in English language!

An excerpt from what we offer

We were heavily involved in the development of the 2D real-time strategy game Sorades - Die Befreiung, of which a freeware version was released in 2006 and which subsequently won the German Game Developer Newcomer Award in the same year. The game is set in a science-fiction scenario, where the player has to defend mankind from a malicious alien race called the "Loaders". In an epic battle, the player struggles to liberate Earth from the claws of the fiendish aliens and attempts to unravel the mystery that surrounds the ruthless attack of the Loaders. 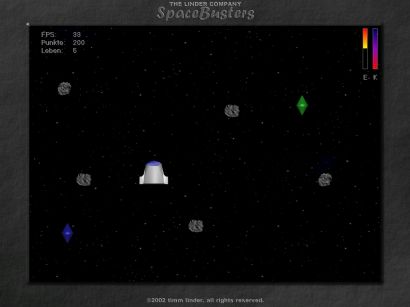 In our game SpaceBusters, you are racing through the infinite depth of space with a small starship, always trying to avoid collisions with dangerous asteroids. During your flight, you can use a laser cannon and the sophisticated plasma torpedoes to complete a journey full of mishaps. In the end of each match, you can sign in a highscore table. The exciting game is intensified by a modern sound track which goes well with the up-to-date graphics.

The latest news at THE LINDER COMPANY Software

This new version includes a few bugfixes and minor improvements.

The patch to version 11.0.1 of our popular scheduler and reminder fixes compatibility issues with Windows 7.