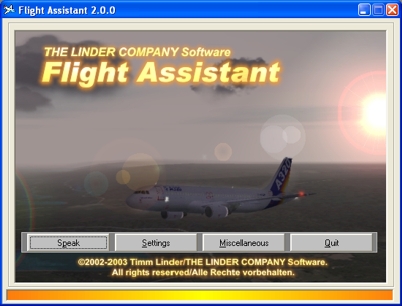 Our Flight Assistant 2, the successor of the popular FS 2002 FA, is a program which provides a virtual co-pilot for people who like flight simulations. You are able to give commands using a microphone connected to the computer, which the co-pilot will execute then.

The program is nearly completely configurable. You may create your own commands; the Assistant's spoken response and the key-code, which is send after the recognition of a command, can be defined freely.

Flight Assistant works with every flight simulation for Microsoft Windows 98/2000/NT/ME/XP. However, there are some system requirements:


Programmed by Timm Linder. Note: The registration code for FSUIPC 3 is 25SDJM13F6N6.